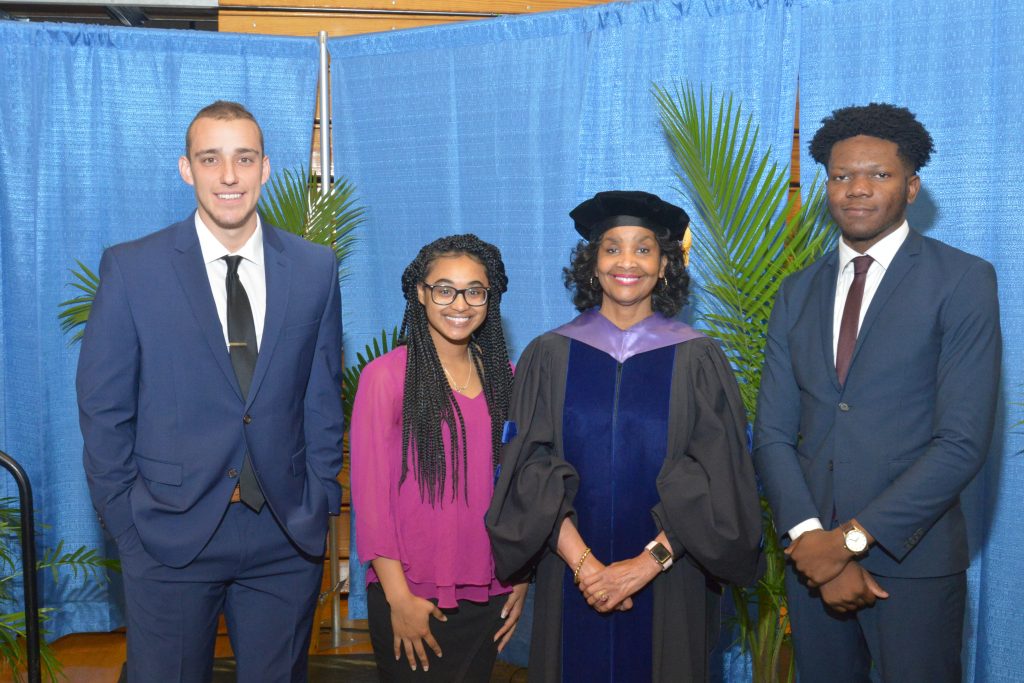 ALBANY, Ga. -  Honors Day serves to formally recognize and honor undergraduate students from all disciplines who have demonstrated excellence in achieving and excelling in academic course work and research. This year’s theme was “Honoring a Legacy of Academic Excellence and Achievement.”

The ceremony began with a prelude from the Albany State University (ASU) Brass Ensemble, followed by opening remarks from professor and Honors Day committee chair Florence Lyons, who is also director of the ASU Honors Program.

ASU is proud of all of the 2018 honors students, including Chiagoziem Agu, Levi Koebel, and Alexius Lampkin, three students who were chosen to give reflective statements during the program.

A sophomore biology major, Chiagoziem was recently awarded the Frederick Douglass Global Fellowship. The fellowship is funded by the Penn Center for Minority Serving Institutions at the University of Pennsylvania and the Council on International Educational Exchange (CIEE). It will allow Chiagoziem to take part in a four-week study abroad experience in Cape Town, South Africa.  Only 10 students in the United States were selected. Chiagoziem expressed his appreciation of ASU saying, “Attending Albany State has been the best decision. ASU professors go far beyond their job descriptions to help and develop students in and out of the classroom,” he said.His advice to students was “be true to yourself. That may sound cliché, but you lose your dreams when you’re being someone else.”

Levi Koebel is a junior biology major. In addition to his busy academic schedule last year, Levi was awarded the Student Athlete of the Year and was a member of the Academic All-Region Baseball Team.  He has also participated in ASU’s Summer Research Writing Institute.  In addition to being on the Dean’s List every year, he has been one of the highest-ranking biology majors. Levi inspired students and attendees saying, “We all must unite from within and kindle inner spirits to reach your dreams. Stay motivated and open-minded. When we do this, I believe everyone is capable of more than we can even fathom.”

Alexius Lampkin is a senior chemistry and forensic science major. She has been pre-accepted and offered full-ride scholarships for post doctorate programs at Northwestern University, the University of California at Davis, University of Minnesota and the University of Wisconsin. Lampkin was also recently recognized as a University System of Georgia Student of Excellence. She offered this advice to students, “Make use of your time, adjust to change, and believe in yourself. Don’t worry about telling people how great you are. They will find out by the excellence you achieve.”